THE SPOKEN WORD PROJECT AT THE GZK/UGCS

Home » THE SPOKEN WORD PROJECT AT THE GZK/UGCS 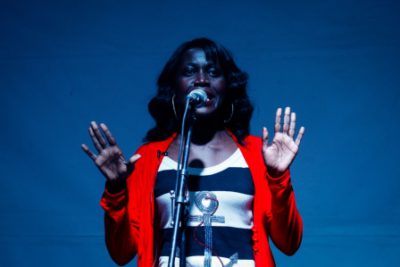 In recent years, the Spoken Word has gained great popularity in Germany – the biggest Poetry Slam of Europe, the Bunkerslam, takes place annually in different German cities. But also in bars, museums and coffee shops of Kampala and other African cities a Spoken Word and Poetry Scene has gradually developed. Until now it has mainly been acting in small groupings and without further public impact.

As a reaction to this situation the Goethe-Institute South Africa initiated ‘The Spoken Word Project’. With the aim of developing a panafrican network and increasing the visibility of this art form the project is currently touring through eight African countries (South Africa, Madagascar, Cameroon, Angola, Uganda, Kenya, Mali and Ivory Coast) organizing a Poetry Slam with ten participants in each place. The winner of a country has the possibility to travel to the next destination and learn more about the local Spoken Word Scene.On Tuesday, the 24th of September 2013, this Poetry Slam took place at the GZK/UGCS.

Already two hours before the event started the garden of GZK/UGCZ was filled with nervous artists searching for a silent corner to practice their texts. Tension was in the air, for many of the poets it was the first big performance on a stage with spotlight and all the trimmings. After the table of the jury was brought in position, the curious audience had taken place and every artist had drawn a lottery number, Roshan Karmali opened the evening with charm and esprit as our MC.

The first performance of the evening was reserved for the winner from Angola, Ermildo Saraiva Panzo. His Portuguese verses presented with passion and ease convinced the English speaking audience from the first sentence on regardless of the language barrier. After this rousing opening it was up to the ten Ugandan artists to take up the challenge of round one of the Poetry Slam. Each of them had five minutes to perform a poem of their own repertoire. The presented texts showed a big variety of content: Love, childhood experiences, Africa, recent political issues,….But the three-headed jury not only judged the finesse of the content. Acaye Elizabeth Pamela, Peter Kagayi and Beverly Nambozo also took into account the stage presence of the artists, their interaction with the audience and the linguistic presentation of their poems. The loud and quiet, sad and funny, energetic and soft words put the audience in silent, devoted fascination, triggered loud laughter and aroused cheers and enthusiasm at the same time. The atmosphere increased during the evening and couldn’t be tarnished by the short rain shower just before the break.We were fortunate to also host Kgafela oa Magogodi, patron of the project from South Africa. With his guitar sounds and convincing poetry lyric he made sure that the clouds disappeared again and round two of the evening could be ringed in. In the second round of the evening the artists were supposed to refer to the content of the two poems performed at the previous stage of the Spoken Word Project. The performances passed in no time and at the end of a colorful and eloquent evening the jury was left with the task to choose the best presentation.

With a short gap to Slim Emcee (UG) the Poet (2nd place) and Maritza (3rd place) Rehema Nanfuka was the winner of the Spoken Word Project in Uganda. As such she will continue the journey to Nairobi (Kenya) in October. The many creative texts, the motivated and rain proofed audience and the entertaining moderation of Roshan Karmali let „The Spoken Word Project“ at GZK/UGCS become an unforgettable, impressive evening. We thank the Goethe-Institute South Africa for the Africa wide coordination and organization of the event.