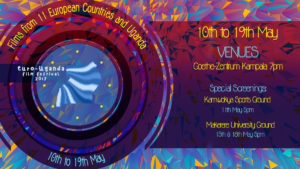 The Euro-Uganda Film Festival has been back with its 3rd edition! From 10th to 19th May, the festival presented an exciting variety of fiction films, documentaries and animation films from 11 European countries which offered something for every taste. A selection of thrillers, comedies and art house movies showcased highlights of the European film industry of the past years, all screened with English subtitles. The growing film industry of Uganda was represented with a selection of short films from Kampala Film School and the preview of Isaac Nabwana’s newest Wakaliwood action film. For the first time, the festival took place at three different venues: Goethe-Zentrum Kampala, Kamwokya sports ground and Makerere University main sports ground.

The following countries and their movies participated:

Ramasan has a lot of responsibility for an 11-year-old. In traditional Chechen society, he is now considered the man of the house in charge of his mother and two younger sisters. His world is now centered in Macondo, a tough ethnic neighborhood in the industrial suburbs of Vienna. Ramasan speaks German much better than his mother Aminat, and he often translates for her regarding school and government welfare matters. Ramasan’s confined world is disrupted when Isa, his father’s war buddy, moves into the low-income housing complex. Isa pays his respects to Aminat and her children, giving them the watch and a family photo his dead friend always carried with him. This encounter awakens Ramasan’s interest in his father. When Aminat begins to warm up to Isa, conflicted Ramasan feels the need to protect the image of his dead father.

A murder and the ensuing investigation create panic in the so-called Belgian cattle hormone mafia. During a transaction, an illegal growth hormone dealer and a police informer confront each other in a crime investigation. But then, a dark and unsettling story about loyalty and friendship unfolds relating to their tormented past as former childhood friends.

Known internationally as a distinctive and engaging storyteller, the Oscar winner Susanne Bier sparked international interest with the film “In a Better World”. The film takes us from an African refugee camp to the grey humdrum of everyday life in a Danish provincial town. The lives of two Danish families cross each other, and an extraordinary but risky friendship comes into bud. But loneliness, frailty and sorrow lie in wait. Soon, friendship transforms into a dangerous alliance and a breath taking pursuit in which life is at stake.

A modest provincial chef and restaurant-owner is summoned by the President to be his personal cook at his official residence, the Elysée Palace. The President has developed a hankering for the traditional regional cuisine he knew in his youth and decides that Hortense is just the woman he needs to provide him with “the best of France.” Based on the true story of the French president first female chef, Danièle Delpeuch.

My Name is Victoria pulls viewers into a unique adventure. In a single take, a group of would-be tough guys and a young Spanish woman wind their way through a long Berlin night. Victoria is a runaway party girl, who’s asked by three friendly men to join them as they hit the town. Their wild night of partying turns into a bank robbery.

Bruna is an esthetician trying her best to survive. She is betrayed by her fiance’ and is followed closely by an unscrupulous supplier. She receives a confession by a client on her deathbed to whom she files nails in prison. Norma Pecche, the dying prisoner, is the mother of a famous gangster, who has hidden a treasure in jewelries in one of the chairs of her living room. Contemptuous of the danger, she goes to the villa and she finds herself blocked in the garden, together with a wild pig. The tattoo artist, Dino, her neighbor, arrives to free her. She discovers that the eight chairs have been sold by auction to different customers. Dino and Bruna start looking for each customer to recover the chair with the treasure. They meet a lot of funny people crossing seas and mountains, but at the end they will find true richness.

Song of the Sea follows the story of a 10-year-old Irish boy named Ben who discovers that his mute sister Saoirse, whom he blames for the apparent death of his mother, is a selkie (seal child) who has to free faerie creatures from the Celtic goddess Macha. It tells the story of Ben and Saoirse’s fantastic journey across a fading world of ancient legend and magic in an attempt to return to their home by the sea. The film takes inspiration from the mythological Selkies of Irish folklore, who live as seals in the sea but become humans on land.

Spain No Rest for the Wicked (No habrá paz para los malvados) Director: Enrique Urbizu Spain/2011/104 min Santos Trinidad is a dirty cop with a violent streak and a serious thirst for alcohol. During a drunken binge, he murders three people in a bar. A witness escapes from the building before Santos can catch him. While Santos sets out to kill the witness and cover up his crimes, a judge and the police conduct an investigation into the murders. Santos’ hunt for the witness and the parallel police investigation slowly converge to reveal a massive criminal conspiracy that no one involved could have ever anticipated.

Sweden
Nice People (Trevlight Folk)
Director: Karin af Klintberg, Anders Helgeson
Sweden/2015/100 min A group of young men who fled the war in Somalia have ended up in a rural town in Sweden where integration is tough. Something needs to be done. Local entrepreneur Patrik Andersson gets an idea, who not use sport as a bridge to get people closer to each other? The goal: to create the first ever Somali national team in bandy and make it to the World Championship in Siberia. This is a story about racism and fear, but it’s also about bravery and doing something that hasn’t been done before.

This film is about a veteran; Agubiri The Gateman. He resigned from the army and became a security guard at a company. One time while he was on duty, one of the company’s car burst which resulted into him being hunted by the police and owners of the company.

A story about a single mother and two sons who lived in the slum of Bwaise called Kimombasa. The family did everything in its power to survive in a poverty life to pay school fees, food and shelter, involved in illegal acts like prostitution, drugs, corruption.

After losing his sight in the early 1980s, John Hull knew that if he didn’t learn to understand blindness, it would destroy him. He began keeping an audio diary. Drawing on John’s original recordings, ‘Notes on Blindness’ is a poetic account of loss, rebirth and renewal, and the discovery of a world beyond sight – an ambitious and ground-breaking work that is affecting, innovative and one of this year’s essential documentaries.