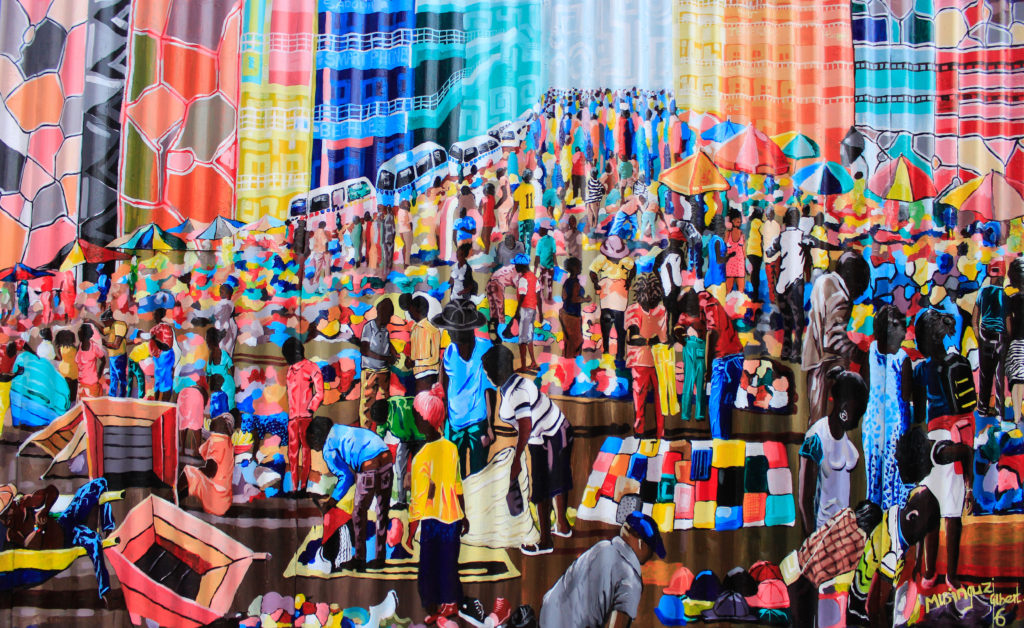 The third edition of the Sadolin MabARTi Challenge has come with a momentum that demonstrates the giant strides that this event has taken, citing the enthusiasm with which artists are enrolling into the project, punctuated by the dynamism exuded in the works that are being produced. Running under the banner of “Colours of Urban Nature” as this year’s theme, the participating artists spared no energy in visually depicting Kampala city in all its wealth and diversity through a multiplicity of styles.

The third edition of the Sadolin MabARTi Challenge has come with a momentum that demonstrates the giant strides that this event has taken, citing the enthusiasm with which artists are enrolling into the project, punctuated by the dynamism exuded in the works that are being produced. Running under the banner of “Colours of Urban Nature” as this year’s theme, the participating artists spared no energy in visually depicting Kampala city in all its wealth and diversity through a multiplicity of styles. An army of twenty three emerging and mid-level career artists stormed the different parts of the city with a singular vision – to paint the colours of urban nature and win a cash prize that was up for grabs. More than that, they gladly agreed to join the ongoing efforts to bring art to the public space, courtesy of Sadolin Paints Ltd, Uganda’s premier paint manufacturer.

The Sadolin MabARTi Challenge arguably falls under the domain of public art, which essentially implies taking art to the public arena so as to be accessed by all. Contemporary art has, since its advent in Uganda some seven decades ago, been condemned to art galleries that are the preserve of certain classes of people while the wider public remains oblivious of its existence. In general terms, public art is a communal activity; its reach can be powerful for communities and neighborhoods. Artists realize a democratic ideal in outdoor settings that are free to all viewers. In the same token, the public role in public art is essential to the artist. People enliven a work, are inspired and intrigued, motivated and provoked. Moreover, this is an issue that the jury deliberated on, albeit in the passing, while attempting to understand how the audience actually responds to the MabARTi, thus raising such questions as: Is there a relationship between the content and the audience? Do the largely mobile audiences even take notice of the art works via their car windows or while simply walking by? It goes without saying that art’s ‘publicness’ rests in the quality and impact of its exchange with its audiences. Without the panelists attempting to answer these rhetoric questions, one thing stood out clear: the Sadolin MabARTi Challenge is growing in potential to change the public perception of art, slowly but surely. Through persistence the public will surely become liberated from its visual unawareness and ultimately the artist will be the net beneficiary of this eventual enlightenment. As in the previous two editions, the artists in contention were required to work independently on sites allocated to them by the organizers. Aware of the challenges of working on a corrugated surface, they had to come up with convincing compositions with evidence of mastery of colour, pictorial construction and thematic interpretation. The result was a blend of ideas ranging from extremely abstracted representations of Kampala’s skyline reduced to bare geometrical colourful shapes to the more realistic busy Kampala streets choking with human and motorized traffic. There was also a noticeable presence of humanity in nearly all the compositions portraying the demeanor and resilience of the human spirit latent in the city dwellers. As usual the panelists had to face the tough moment of choosing the winning pieces out of the pool of equally well-executed works. This notwithstanding, we had to be guided by the artists’ originality of vision and spontaneity of expression in underscoring the element of painting the colours of urban nature, as the theme suggests. There was no ambivalence in the jury’s decision on the winning piece by Gilbert Musinguzi titled Kampala Kuyiiya. To the credit of the artist, the panelists were in agreement on his choice of depicting the urban realities of Kampala City that nearly everyone is familiar with; the hustle and bustle of people trading in all manner of goods. The construction of the composition right from the foreground shows a sea of humanity engaged in trade to the background where we see the pinnacle of the work culminating from the hill-like perspective that is characteristic of the undulating landscape of Kampala city. The choice and distribution of colours in the work completes the icing on the cake. The first and second runners-up equally exhibited their ingenuity in not only the creative display of colour but also the compelling compositions in relation to the theme. That said, the jury wishes to thank all those that participated in this year’s edition of the Sadolin MabARTi Challenge and we all look forward to the next edition.

Many thanks to Sadolin Paints Ltd and Goethe-Zentrum Kampala/ UGCS.