Filmscreening: “Ndi Mulungi Mu Langi Yonna. I am Beautiful in every Shade” by Ana Scheu Amigo 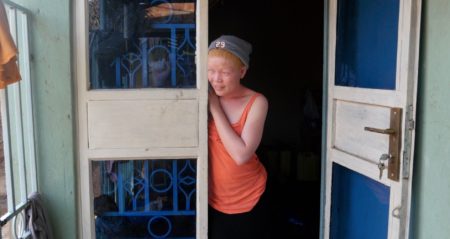 Goethe-Zentrum Kampala/ UGCS was very happy to host the film of swiss Filmmaker Ana Scheu Amigo’s Debut film “Ndi Mulungi Mu Langi Yonna. I am Beautiful in every Shade” at the GZK/ UGCS Conference Room on the 19th February 2019. The Documentary film is portraying four people with albinism living in Kampala. What started as a field research for her Anthropology studies, was soon accompanied by film clips of Day-In-The-Life-Scenes and Interviews which Ana then put together to a Documentary Movie.

“How do you deal with the fact that you look very different from everybody else?”

In Uganda, people with albinism attract attention everywhere they go, and they often experience stigmatization. The documentary portrays four young people living with albinism in Kampala and how they deal with their “otherness”.

Madina is a high school student who grew up in the slums as the only person with albinism in the area. Phyllis became famous when she acted in a music video. Sarah gained confidence when she started playing experimenting with her looks. Martin works as a model and activist.
The film provides a very personal glimpse into their lives.

Three of the four protagonists, Sarah Koehler, Madina Mutesi and Martin C. Lubwama, joined the Kampala film screening for Q&A- Sessions with the audience, answered numerous questions while topping off the whole evening with a lot of fun and humour.

The film is part of a project the same title, which is ongoing, conducted by Ana. To stay updated, visit the Facebook page here.