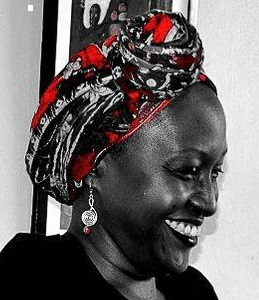 This August, when the play “Tropical Fish” was performed at the GZK, our Rooftop Terrace was sold out down to the last seat. Doreen Baingana is the author of the award-winning short story the play is based on: It is a story about a young campus girl’s affair with an older white businessman in Kampala. For Christine, the main character, it starts off as a fun escape from her ordinary life to a “bubble baths and a gin-and-tonic life” until it becomes a painful exploration of her worth as a black woman.

Even outside of Uganda the play and its literary base were an all-around success, for example when the play was performed at the Afri Cologne Festival in Germany this June. For our Artist Profiles, we wanted to get to know the person behind the captivating story and an active member of Kampala’s literary scene. Doreen Baingana studied law at Makerere University in Kampala and Creative Writing in the U.S. The play is adapted from the title story of Baingana’s collection, which is available on Amazon.

How do you explain the topic’s strong appeal to the German audience?

Well, I wouldn’t say that the play appeals to all the Germans. We had two shows at the Afri Cologne Festival and the audience there was already interested and curious about African theater, some of the people already had a connection to Africa, had lived or travelled here, for example. But from what people said to me after the play, it seems they were interested in the main character’s view of a white person, because they were less aware, I think, of how they are viewed by another race. When black people are in the minority, they usually know how white people perceive them, but the dynamics of white people in an African space is discussed less. So that was a bit different.

But in the end, it’s a story about human relationships, about this woman’s vulnerability, and it’s explicit about the sexual and that, of course, interests people or rather keeps them listening. Also, the actress was very good at portraying all the emotional turns, from just wanting to have fun, to her curiosity, to how she gets angry with Peter, the white man. The plot twist of the pregnancy and the abortion is also quite dramatic, shall we say, even if nothing dramatic happens on stage, it is dramatic psychologically and people are moved by that. I would think that this is the reason why it appeals to many people: it’s an exploration of an intimate relationship: almost everyone goes through that.

Do you see a difference between the reactions of the audience at the performance in Germany and Uganda?

The German audience was much quieter, so I couldn’t really tell what they felt. It was performed in a bar, it was dark and they didn’t respond loudly during the performance. A few people came and talked to me afterwards; perhaps they were the ones most comfortable with English. At the show at GZK there was a strong reaction from the audience, a lot of laughter, one woman was even making comments throughout, so it was easier to gauge their response. I felt that people here feel that the play was about ‘us’, our story. In Germany, it  was a story about somewhere else; I think that made a difference. Also, the discussion at GZK was longer and more in-depth, in Cologne, there wasn’t enough time: The moderator quickly asked me two questions and then it was over. At the long discussion here in Kampala, people engaged more with the play because they had to think deeper about it, provoked by the moderator and other people’s insightful comments. That also made a difference. So I was really happy about this show.

In your story you do not seem to judge the relationship between Christine and Peter, but you depict the way the mixed couple is received by its environment. What do you personally think or feel when you see couples like this in daily life?

My role as a writer is not to judge; judging is what they do in church. My role is to observe, to explore and try to understand. Many of the things we do are markers that we are human, and so I can’t point a finger and say, “I would never do that.” Let’s say, for example, we are talking about prostitutes. I would never say “I would never do that”, rather, I would ask, “Why does she do that?” I would ask myself, “If that was me, what I would do and why I would do it?” I use my imagination and empathy, so that the reader can also imagine something outside their own experience. For example, when you’re involved with someone from another race, it’s personal; what it looks like from the inside can be far different from what it looks like on the outside. My story is an exploration of one woman’s sexuality, but in that sense, in different contexts, every woman goes through that journey. In my own life, I’ve had to ask myself many questions. Who am I as a woman? What do I want in a relationship? What do I want from other people? Are my motives always clear and correct? What is this word ‘love’? For example, if a husband buys a car for his wife, is she with him for the money? – No, he is supporting her. But if a young lady and a 60-year-old man are dating and he buys her a car, is she with him for the money? – You can’t always tell. What is it one really wants from another person? When you date someone of another race, you are judged for it. The assumption is you shouldn’t be together and therefore the question is: Just why are you together? It must be for the “wrong” reasons, because the relationship is considered transgressive. It can’t be mere love.

But this is also about age.

Yes, it’s age, it’s race, it’s class, it’s cultural background. If someone comes from a deep village somewhere, or even from different sections of Kampala, and someone else grew up in Cologne, they first have to cross something to reach an understanding. So I ask, what is that bridge they are crossing? When this play was shown at Maisha Gardens earlier this year, a white man in the audience said that he knows many ‘Peters’ and that many of the white/black relationships here are transactional. I would imagine that what may start off as a transaction can become love, because relationships are not fixed mathematical formulae. So I try not to judge.

Christine, the protagonist, is played by the brilliant actress Rehema Nanfuka. Apart from her acting, what made you choose her, in particular, to embody your main character?

The first performance, at the Writivism Festival 2016, was supposed to be by another actress, but because of logistics and planning changes, the other actress couldn’t do it. The next actress I thought of was Rehema, because I had seen her in other plays before, and she was brilliant. I saw her in two plays and she had been very different in each, really strong, and she knew how to express shifting emotions. You couldn’t see her as Rehema anymore; she was completely absorbed by the character. We were lucky she was available, and she quickly learnt the part and did a wonderful job at the very first show. Once she knew the play, we just kept going with each new opportunity we got.

In your story, you exclusively depict the woman’s perspective of the relationship, her feelings and her sexuality, and Christine, the protagonist seems to be a very strong and powerful woman, although she takes a rather passive part in the relationship with the man. Would you consider yourself as a feminist writer?

Yes, I am definitely a feminist. Anybody who believes that when a man and a woman do the same work, they should be paid equally, is a feminist. You may not use the word ‘feminism’, but if you believe a man and a woman can be equally intelligent, you are a feminist. I didn’t necessarily want to make my character, Christine, a stereotypical strong, powerful woman who overcomes all her challenges. I wanted to show her vulnerability. I wanted to show how youth plays a part in this. When you are young, you are exploring, and sometimes that exploration means that you just let things happen to you. Ultimately, you are making choices, but you may not be aware of it. When she was told, “Oh this guy (Peter) wants to see you”, she didn’t ask herself, “Do I really want to see him?” She was like, “Let’s just go.” We do not always take responsibility for our decisions.

As a feminist, I don’t feel like I should only portray strong women, no. As a feminist writer, I need to portray the truth as I see it, which shows that we humans are exceedingly complex and have both strengths and weaknesses. We have external forces working on us – social, economic, political, cultural – and we have internal psychological motivations and compulsions. Both work on each other, forming a person’s character and leading to a person’s actions. Generally speaking, these external forces impact men and women differently, and tend to have a greater negative impact on women than on men. Generally. My interest as a writer is to explore these dynamics at an individual level, to revel in the mystery of human nature. My interest, as a writer who is a feminist, is to explore how this unequal world impacts individual imagined women and how these women swim through it. I don’t prescribe answers. In this particular story, I was telling a story of a girl who doesn’t realize the power of her sexuality and faces the consequences of this. Women are seen as sexual objects, so if we don’t get to understand ourselves as sexual beings (but not only sexual, of course) we are missing something. Someone in the audience in Cologne said something like, “You don’t talk about Christine’s education, you only talk about her sexual life. You mentioned that she was at Makerere University, that she had options, but she didn’t talk about her studies or intellectual stuff.”  The person was right, I made Christine focus on the relationship because I was exploring this main theme in a short story. If it was a novel, I would have developed other themes more fully. As the story evolves, Christine realizes that there are consequences to her actions and therefore that she has agency. When she asks, “Why are all these kind men poking things into me?” She then answers her own question: “I let them.” She reaches a point where she realizes – and this is what I would say is my feminist input – that she has the power to make choices, even when she does not realize it. Life itself showed her that she did.

Currently Doreen Baingana is working on a novel partly based on the life of Alice Lakwena, who led a rebel movement in Northern Uganda in the late Eighties.