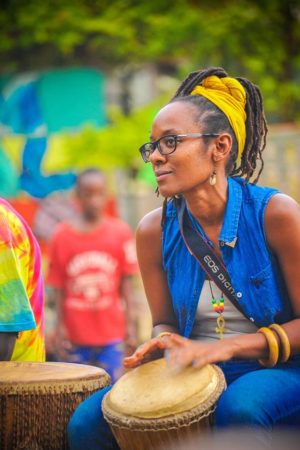 On the 6th of May 2018, the Goethe Zentrum Kampala (GZK), together with many local partners and sponsors, launched the first Azulato Children’s Festival at the Seven Trees Gardens in Kololo.The festival was designed to support children’s curiosity and creativity and offered many different hands-on activities, workshops and live performances such as pottery, dance, animation and robotics. It was a free event for children from all different backgrounds where schools from different parts of Kampala were invited to take part in the stage performances and festival activities. The first Azulato Children’s Festival was very successful and the GZK is looking forward to hosting this event on an annual basis.

On the 6th of May 2018, the Goethe Zentrum Kampala (GZK) together with many local partners and sponsors launched the first Azulato Children’s Festival at the Seven Trees Gardens in Kololo. The festival was designed to support children’s curiosity and creativity and offered many different hands-on activities, workshops and live performances such as pottery, dance, animation and robotics. It was a free event for children from all different backgrounds where schools from different parts of Kampala were invited to take part in the stage performances and festival activities.

The children loved to run around between the three gardens in the venue and to try out all the different activities. With around 1000 visitors and a huge media coverage, the first Azulato Children’s Festival was very successful and the GZK is looking forward to hosting this event on an annual basis.

Hi, thank you for coming to this interview Liz. What inspired you to start Ngoma Jam Session?

Hi, my name is Liz Kamugisha and I’m a co-founder of the Ngoma Jam Sessions. I started it about three years ago with another friend of mine who is a professional drummer. And the reason I started it was that I usually go for a lot of music events and concerts and I really like the cultural music, especially with percussion, however, everything was always a band set up where you just watch. So I thought that it would be interesting to create a space where people could also participate in the drumming. And the more research I did, the more I realized that it’s really part of our culture, drums were not only to be used as a celebration or for performances, but they had so many functions in African life.

And while doing some research I found out that it has so many therapeutic benefits, there are so many scientific studies around how drumming affects your brain, your mood, so many different ways that it can be used in a positive way. And that just motivated me to invest and buy our first set of drums and start holding the drum circles.

So basically a drum circle is an interactive, safe space where people can come and explore percussion music. So we all play the drums together and usually, there is a facilitator who kind of goes through some games for you that you can play and gives you a few tips, especially if you are new to drumming. And yes we just play together, we create rhythms together and the magic happens just like that.

That sounds really good. How often do you hold these drum circles and where do they take place?

Ngoma Jam Session is a community-based event, so every last Saturday of a month we host community drum circles. Right now they’re being hosted at Nilotica. Nilotica already has their own cultural ensemble, they’ve got a band that performs, but because we are connected by our passion for the drums, we kind of teamed up forces and they added some drums to our collection and host the drum circles every month. So it’s not only for children, really anyone can come and join us and enjoy the benefits of drumming.

Yes that’s very nice. You took part in the Azulato Children’s Festival with Ngoma Jam Sessions and offered drum workshops and drum circles for the children. How was it to drum with the kid’s: Did they participate well and enjoy it?

Yes, Azulato was a great, a really fantastic festival and from the moment that we arrived and set up the drums and were just testing and playing the drums, immediately there were like huge groups of kids just rushing to our tent. From that moment until the very end of the event, when we had to pack, I had to tell some kid’s “sorry this ended now, we need to pack up”.
So the kid’s engaged like 100 percent and they brought so much energy and life to the circle. Also it was very funny because we had planned and prepared some workshops and some more structured games to go through with the kids, but actually we found that they kind of had their own plan, so you know it was nice also to be able to be flexible enough to let them lead the circle as they wished and have them control the rhythms.

So yes, it was a lot of fun and we had kids of all ages, some who came with school groups who were a bit older and others who came with their parents. It was so much fun for everyone, to create music together. And they created the rhythms really well, quite impressive, I could see that they possibly drum at school and it was something they really enjoyed to do, so it was really fun.

Yes, and I also saw some parents who really enjoyed to drum with their kids.

Yes, it’s for everyone, everyone can join in.

And you had like a timetable standing in front of your tent at the Azulato Children’s Festival but even during the workshop break, there were kids in the tent who played the drums on their own.

Haha yes, they already knew what to do.

Yes, they really enjoyed it. So it wasn’t your first time to do drum circles with children?

Yes, we drum with so many different groups of people and children. Sometimes parents book us for birthday parties, so we go to some children’s birthday parties and we host drum circles with them. We’ve also worked with Kaininga Children’s Development Center, which is based in Fort Portal, for children with disabilities. We’ve been there twice and they have like a fun sports and arts day once a year, so usually we go for that and we host drum circles with these kids as well. I really enjoy working with the kids, the energy is like they don’t question what’s going on or whatever, they just want to get a hundred percent involved and that’s really nice.

Yes that’s nice in working with kids: They are so curious and want to try out everything and they are not scared of trying something out because they don’t think too much about it.

Yes, usually the adults while playing drums say “Oh I don’t know how to play” or “This sounds bad” or “I don’t want to ruin it” but kid’s don’t have this fear, which is really nice.

At the Azulato Children’s Festival, you could hear the drums from far and many people who arrived went directly to the drums, following their sound.

Yeah, I know the drumbeat travels really far and once it gets in your head you’re like “Ok, I really want to go and see or be part of it”.

How was the surrounding and the sound situation at the Azulato Children’s Festival?

The gardens were beautiful and we were blessed with great weather that day as well, there was no rain or anything like that. And yes I mean drumming is all about making noise, so whatever noise was around got drowned away when the drumming started. I felt sorry for some of the people who were around us when the drumming got a bit intense and maybe they were not able to hear each other. But everyone was quite nice and we tried to keep the volume down during the breaks.

Do you have any future plans for Ngoma Jam Sessions, like any bigger projects you want to do in the future?

We would really like to work a lot more with the communities around, with different groups in the communities. In the future we would like to cooperate and reach out to some organizations that work with refugee camps because drumming is a great way to work through or deal with difficult emotions like anger or depression. And you find refugees sometimes have gone through quite a lot and they don’t have any channels to release that kind of emotions, so we are really looking forward to maybe doing some projects with some refugee camps and also any other organizations that are tackling mental health. We would like to partner with psychologists or counselors and find ways that we can add the drumming together with their programmes to help people who are going through difficult emotions. To help drum it out but also to give support to the counselor or if they need someone to talk to.

And we are also looking forward to working with some schools especially during the holiday season when they have some time off, it would be nice to run some kind of children’s music camp or drum camp in between the school terms. So that’s also something we are looking forward to, to partner with some schools and pitching this idea to different schools and organizations. Yeah, there are a lot of ways for us to integrate the drum circle in different groups of society and everyone is just a little happier with the rhythm of things.

Yes, it gives people confidence to drum together with a group.

Yes, especially drumming with other people, like that’s where the key is. I mean you can also drum alone and it can be a nice way to release stress but when you’re drumming with people you just feel more connected especially with groups. That’s why I like drumming with school groups, groups of kids or maybe at refugee camps. There are groups of people who are together in this place, drumming can make them feel connected to each other, also it brings out more compassion and causes a feeling of unity and being able to harmonize with someone else despite any differences. So I think these are areas where it could help to get a bit more unity and compassion within these groups of people.

That’s a really nice approach and I wish you a lot of success for all your coming projects. Thank you very much for taking part in the Azulato Children’s Festival 2018 and for taking your time for the interview.