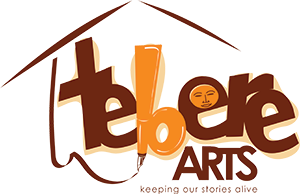 The workshop on scenography was one of the Tebere Arts Foundation’s series of mentorship activities for the 2021/22 emerging artists cohort. The facilitator was Frieda Schieder, a renowned scenographer from Germany but who has worked across Europe as well as in Cairo, Egypt.

The objective of the workshop was to build capacity for the emerging artists in residency with Tebere Arts Foundation to harness scenography as an artform and for Tebere Arts Foundation to begin to cultivate ground for scenography to be considered very important on Uganda’s arts’ scene and industry. According to Tebere Arts Foundation projection, with all the investment being poured into Television production, film-making and live performers getting interested in creating and performing work in non-conventional spaces, the artform of scenography is going to be very crucial in the next few years. Therefore, it is very important to begin to offer training in this area to prepare the industry and artists for such future demand. The participants had initially had a brief interaction with Frieda Schnieder way back in June when she taught them for two days introducing to them the concept of scenography. It was very clear from the beginning that the artists took to her and were very interested in the concept of scenography.

With the financial support of Goethe-Zentrum, Tebere Arts Foundation was able to have Frieda teach a Seven day virtual workshop in November 2021, from 8th to 12th, 20th and 30th. The sessions were organized in three ways; a lecture from Frieda, a discussion following the lecture, an assignment from Frieda to the participants and on selected days, the participants would make their presentations in response to the assignment and on those selected days, we organized one on one sessions between the participants and Frieda. Each day, Frieda worked with the participants for six hours, three hours in the morning with two breaks and three hours in the afternoon with breaks. On some days, where the participants had to go in the field to research for their assignments and to take pictures or videos while doing their assignments, their interaction on zoom with Frieda was limited to either three or two hours.