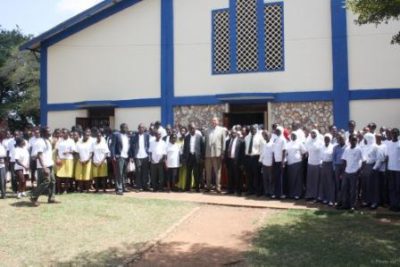 The Festival of German Language took place for the 5th time in Uganda this year. More than 300 students from all over the country participated proving their language skills with a lot of creativity.

Dirndl, leather trousers and Punk clothes, poems by Goethe and the dream of Bionade in Uganda: Students of German Language surprised the audience with lots of creativity at the 5th Festival of German Language on Sunday, 07th July 2013, at St. Mary‘s College Kisubi. More than 300 students from nine different Secondary Schools took part at this year’s festival to compete against each other in several disciplines and prove themselves in front of the jury formed by Isabel Thaler and Susanne Schmieder, two Germans doing an internship at Goethe-Zentrum Kampala/ Ugandan German Cultural Society, and Nakaliisa Aminah, a Ugandan student of German at Makerere University. With strong commitment and many ideas they made it really hard for the jury to pick just one best group per discipline.

Playing with the language, the students showed that German is more than nominative, genitive, dative and accusative. That German can be a melodic and dramatic language, they demonstrated by poems like “Erlkönig” and “Deutsche Welle” songs. That German stands for another culture, where people eat “Stollen” on Christmas and where a nudist-beach-subculture exists, they figured out in a Quiz about Germany. That due to the German language you can improve your general knowledge, get to know about renewable energies and inventions from Germany, they experienced when they planned their own exhibition with the theme “Made in Germany” and, besides, put their knowledge to the test. That Germans are not always dressed as bland and boring as the cliché says, they could see during a fashion show and the election of “Miss Germany”. And finally, that German can be something that they gain from learning, they expressed in a poetry slam. We were particularly honored to welcome the German Ambassador of Uganda, Mister Düxmann, and the Deputy Minister of Education and Sports, Mister Baritazale Kule Benson. Both of them emphasized in their speeches the importance of the German language as not only a key to education and jobs but also to another culture, true to the motto of the festival “Deutsch öffnet Türen” (“German opens Doors”).

Judging from what transpired that day, we hope that we can take the fresh breeze with us into our classes and continue with this successful collaboration of Schools that teach German in Uganda. Our special thanks go to the supporting team, including the Embassy of the Federal Republic of Germany, to the Ministry of Education and Sports of Uganda and, last but not least, to the teachers and students of the Secondary Schools, who keep German alive and growing in Uganda.

The 5th Festival of German Language was organized by the Goethe-Zentrum Kampala/ Ugandan German Cultural Society and hosted by St. Mary‘s College Kisubi.