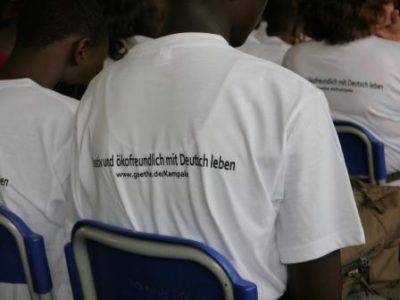 Creatively dealing with the topic ecology… more so in the German language?! This was the challenge students were confronted with on the “6th German Language Festival of Schools in Uganda“, which this year had the topic: „Living creatively and ecofriendly with German!” About 350 students from 11 different schools (2 of them come to the festival for the first time) with the help of their teachers dealt seriously with this task – leading to wonderful results and performances!

The festival is part of the programme „Bildungskooperation Deutsch“, which seeks to support Ugandan teachers, students and other institutions in their effort to teach and learn German. This year´s language festival was held on 22nd June at Trinity College Nabbingo with financial support from the Goethe-Institute Nairobi and the Embassy of the Federal Republic of Germany in Uganda. The well decorated stage and the presence of the Ambassador of Germany to Uganda Joachim Düster created an appropriate environment for the presentations from the different schools.

Students at different levels (S1-S6) portrayed their creative power with regard to using the German language. They competed in poem recitation and a poetry slam. The poems recited included: an adaptation of “Erlkönig“ by Johann Wolfgang von Goethe which presents a child who was destroyed by ecological problems; “Über das Tun“ with an inclination on Rainer Maria Rilkes´s “Über die Geduld“ which is a call to ecofriendly behavior; “Ich bin dagegen“ and “Glück“ which were as well focusing on the need to prevent all behavior which is not ecologically worthwhile. During the poetry slam students recited poems they composed prior to the festival. Miriam Gagal from Mengo Senior Scholl (a PASCH-school) excelled with her poem about the sole responsibility of each person to protect the environment for example by sorting rubbish before throwing it out (see photo). After the poems, an often intellectually interpreted skit from Loriot (“Das Ei ist hart“) was presented.

Furthermore the students entertainingly portrayed traditional attire from different regions in Uganda (for example Bugandan dresses like “olubugo“ and “gomesi“) and their knowledge about Germany, Austria and Switzerland in a Quiz entitled „Wer weiß Bescheid?“. Due to the prevailing excitement for the World Cup Championship, students picked interest in finding out which school had the best student with skills to juggle the ball – an activity which was accompanied by skipping the rope further more at a competitive level. Last but not least guests could visit the interesting artistic exhibition dealing with this year´s topic of the festival. These were pieces of art which students had created before the festival. Students accomplished the task by creating picture stories and comics about ecological problems, such as the story of the degenerating soil presented by the Nabisunsa Girls´ School. Alternatively they prepared and presented photo documentaries about their favourite area or place in their school.

With all the above mentioned presentations, the students did not only entertain the audience, the Guests of Honor and the jury but also convinced them. This year´s jury comprised of Jane Ninsiima (Project Coordinator at the GIZ), Irene Jonen (Intern at GZK) and Ali Kyambadde (Student and Member of GZK). Marvin Bossa won for his school (Kibuli Secondary School) the overall prize after emerging the best in the Quiz “Wer weiß Bescheid?“.

Once again the festival was used as opportunity by teachers to discuss issues pertaining the teaching of German in Uganda and Kouassi Djondo, Head of the Language Department at GZK, even initialized the foundation of the „Association of Teachers of German in Uganda“ (see photo). By the end of the discussion about the functions, the teachers elected Richard Luganda (a teacher of German at Trinity College Nabbingo) as chairman of the association. It was a general consent of the visitors of the festival that the shown commitment to the German language will continue. The school to host next years “7th German Language Festival of Schools in Uganda“ was already chosen that day and it is Kibuli Secondary School.